Everything You Need To Know About Being Greysexual 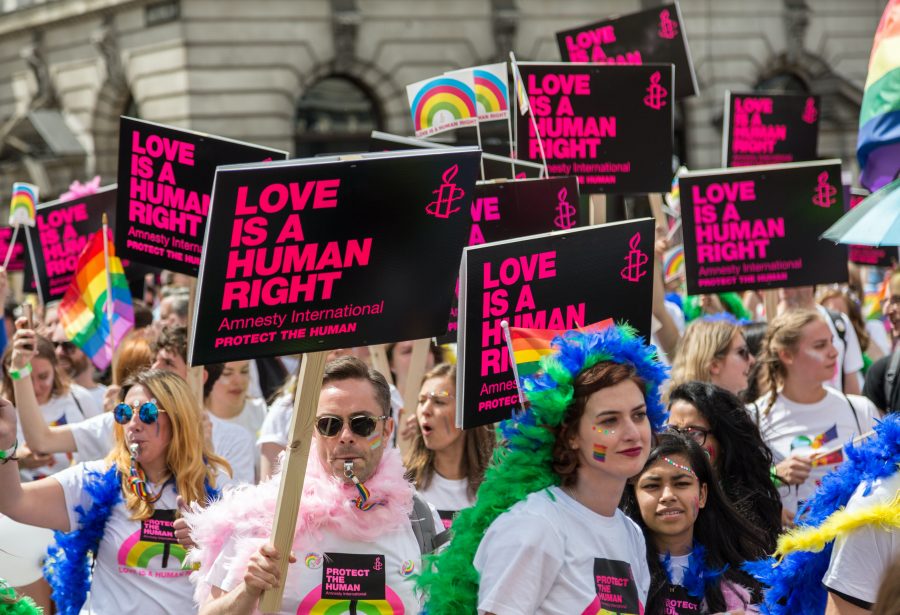 Life never has been and never will be a black and white experience, and that’s especially true when it comes to human sexuality. After centuries of restrictive repression, the waving flags of freedom in the 21st century means sexuality can now be expressed as a spectrum of liberalised identities and meanings. About time too: Wave your coloured flags high and know that there always has been and always will be someone just like you, whether you’re heterosexual, homosexual, asexual, or greysexual (which I shall go on to speak about).

With all sexual identities being termed from our diverse human experiences and feelings, even the most open-minded people can find themselves having to catch up with the new definitions that continue to be termed. But it’s never too late to learn.

Perhaps one of the most untalked about sexualities is asexuality – categorised as the absence or lack of sexual feelings and desires. Most people may have heard about asexuality before, but the truth is that it’s actually a broad umbrella term that consists of a wide variety of other sub-categorised sexualities that I’m going to explore, most specifically the sexuality of greysexual.

Described by sociologist and clinical sexologist Sarah Melancon as “a close cousin to asexuality”, greysexuality is a broad and varied term itself that has a lot to teach you about why it’s important to never feel like you’re not normal.

So let’s dive into the question of ‘what is greysexual?’ and find out what types of feelings and experiences greysexual people have.

What’s the umbrella term of asexuality?

Firstly let’s take a look at the broad spectrum of asexuality. As an umbrella term, asexuality is a category of sexualities that are grouped together because of their mutual lack of sexual desire. Their common link is generalised by the notion that asexual people don’t feel sexually-driven or have a sexual attraction to others in the same ‘usual’ way that other allosexual people do (those who regularly have sexual feelings). Those who identify as asexual also commonly refer to themselves as ‘ace-spec’, short for asexual.

One particular sexuality under the asexual umbrella is greysexual, commonly spelt graysexual, and also known as greyasexual or shortened to ‘grey-ace’. So what is greysexual? It can be defined as relating mostly to asexual feelings, but yet also having feelings and experiences that can’t quite be fully described by asexuality. Hence, the term ‘grey’ – greysexuals feel their sexuality lies somewhere in the middle grey space between asexuality and allosexuality (feeling sexually attracted to others). In a nutshell, sometimes greysexuals (or graysexuals if you live in America) feel sexually attracted to someone, but usually not.

It’s termed a ‘grey’ sexuality for a reason

It’s also important to point out that greysexuals can be orientated to heterosexuality and homosexuality too, or of course bisexuality and pansexuality. So for example, a person can identify as greysexual and gay, commonly known as (grey-homosexual).

Just as an FYI, there’s lots of famous figures who have previously stated in interviews that they identify as asexual, including actress-comedian Janeane Garofalo, The Smiths front-man Steven Patrick Morrissey, and Project Runway judge Tim Gunn. See, there really are plenty of people who might feel just like you…even celebrities. Take a read of enamoree’s article on what we can all learn from the biggest LGBT icons.

When did the term first come about?

I know what you might be thinking: Who exactly comes up with these definitive terms and when did greysexuality first start to be talked about? Well, the understanding of the concept was first explored about twenty years ago on the AVEN forums (the Asexual Visibility & Education Network). Just as another FYI, if you’re wanting to discuss and learn more, these AVEN forums can be a wonderful way for users to have an open and safe space to educate and be educated on asexuality and what it means to be asexual.

Anyway, it was back in 2003 when an AVEN member suggested the concept of “semisexuality”, described as being like a half-way point between having asexual feelings and allosexual feelings. Then years later in 2006, another AVEN member further suggested that these in-between feelings could be termed “grey”, the fuzzy middle space of feeling like you’re sometimes, but not often, both asexual and allosexual. Makes sense, right?

Thankfully, the waving flags of freedom now feature a greysexual flag too. It was designed and released back in 2013 by Milith Rusignuolo who wanted to represent the fluidity from purple (symbolising asexuality), to grey (symbolising the in-between middle-ground), to white (symbolising allosexuality). Make sure you also check out enamoree’s exploration into the bisexual flag too. We can never learn enough about the importance of LGBT history.

As mentioned, online forums and networking chat rooms can be a super beneficial way of finding like-minded people and learning about others’ experiences, and Reddit has lots of discussion threads for people wanting to anonymously share their own thoughts and opinions on their asexuality. Let’s take a look at some comments to learn firsthand how some asexual people see their own sexuality.

One Reddit user, ValiantEinstein, disclosed the feelings they had at the age of 17, summing up perfectly what a greysexual person might be feeling at the peak of their hard-to-navigate teenage years. They said, “I didn’t date at all in high school, never really saw the attraction (ha) and I just felt weird when someone would try to flirt with me. I also had sexual thoughts but never wanted them to happen in real life.”

They then gave some spot-on advice: “Bottom line, you do you and if you develop feelings in the future then change your label. Labels are there to serve you, not the other way around.” Well said ValiantEinstein, well said.

Graysexuality comes in all shapes and sizes

Another Reddit user, Saltyoaktree8, gave their reassurances that greysexuality can still be experienced differently from one person to the next. They wrote, “The good thing about greysexuality is that it’s very broad, and the definitions vary from person to person.” They continued, “Only you can define your sexuality.”

Later in the thread, another user, j_sunrise, disclosed how she’s a 27-year-old cis woman who considers herself grey-ace because she’s “occasionally attracted to people of various genders” but also has zero libdo and no desires to act on her sexual desires.

There’s a common link to autochorissexuality

On another similar thread, one user named manubibi described their asexual feelings as low-level bisexuality and pansexuality, but “never strong enough to actually make [them] want to act on it.” They then continued describing feelings now known as autochorissexuality which is commonly linked to asexuality. Autochorissexuality is defined as someone who’s aroused by external sexual content (ie. characters in films, TV), but rarely ever wants to engage in sexual activity themself.

“The weirdest part is,” they said, “when I picture a sexual act it has to be through a character.” The sexual feelings that manubibi is describing relate to how a person may fantasize about sex, but do so in the third person by envisioning other people rather than themselves.

Another aspect of greysexuality is differentiating between romantic feelings and sexual feelings. When it comes to feeling attracted to someone, sexual and romantic desires aren’t necessarily linked and don’t always come hand-in-hand, that’s why greysexual people often relate their feelings and experiences to romantic orientations such as demisexuality (when you might have a sexual attraction to someone, but only when and if you develop an emotional or romantic bond).

On another end of the scale, there’s also aromantic, which means you have no desires for forming a romantic relationship whatsoever. I told you there’s a lot of sexualities and romantic orientations under the asexual umbrella, didn’t I?

What’s some statistics with greysexuality?

So, according to the 2015 asexual Consensus, 15.6% of its respondents answered saying they identified as greysexual, which means greysexuality is a relatively common identity within the asexual community itself.  In terms of the sexual orientations that greysexual people have, the 2015 consensus also found that around half of respondents identified as exclusively straight, followed by 16.6% queer, 12.5% bisexual, and 11.2% pansexual.

Now that we’ve answered the question of ‘what is greysexual?’ and we know that greysexuality is far more common than you probably thought, let’s talk about how you can know whether YOU might be greysexual.

Are you feeling confused about your own lack of sexuality? Are you wondering whether your sex drive is what it should be? Do you struggle to feel sexually attracted to people in the way you’d consider to be ‘normal’ and ‘healthy’?

Well, you are completely normal whatever sexuality you’re feeling orientated towards, but here’s six simplified signs that you might be greysexual.

Remember that these signs are not clear-cut reasons why you should identify as greysexual. Your sexual experiences and feelings do not define you, nor does a label, so don’t put any pressure on yourself to fit into a solid identity. Check out the flowchart below that can guide you towards clarity!

How to feel proud of your greysexuality

Well, firstly you can feel a sense of brimming pride by taking a look at the selection of asexual merchandise sold by the Gay Pride Shop. We’ve teamed up with them so you can get 10% off your first purchase – all you have to do is enter the code MIINGLE10 when you reach the checkout. Here’s some of their best asexual merch:

The classic asexual flag (the biggest and best of course)

So, now that we’ve done some retail therapy, secondly it’s time to get a little deep. If you’re starting to realise that you might be greysexual, it’s important you come out at your own pace, and only if you ever want to. Don’t feel forced to announce who you are and what you feel. Take some time to sit and ponder on the feelings you have, and consider speaking to others who identify a similar way to you.

Take small steps towards an end goal of self-acceptance and try connecting with others first to help you feel comfortable and ready through their support and understanding. The AVEN forums, or even Reddit, are a wonderful way to find your right fit in an inclusive community of like-minded greysexuals who can help guide you through understanding your sexuality.

Psychotherapist Jane Czyzselka has previously discussed greysexuality and how it can be hard for graysexual people to feel confident owning a sexuality that acknowledges desire and attraction so interchangeably. “We change throughout our lives,” Czyzselka says “from our cells and bodies to our identities. We may start out knowing or feeling that we are gay or lesbian and binary-identified and then after some time we realise that these labels no longer fit us, so we need to re-think and re-calibrate and ask, ‘Who am I know? What do I now like and dislike?’”

I’ll conclude with a great piece of advice that she also championed: “Others may well find it difficult to go with your flow but remember this: no one should tell you who you should be or who you are.” 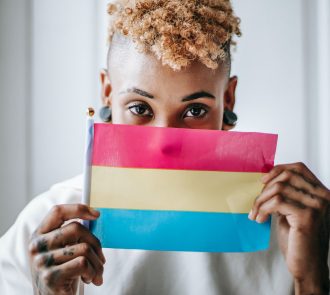 Am I Pansexual or Bisexual? What’s The Difference?